Connect and share knowledge within a single location that is structured and easy to search.

Inbox message showing message in advance, Is it a bug? 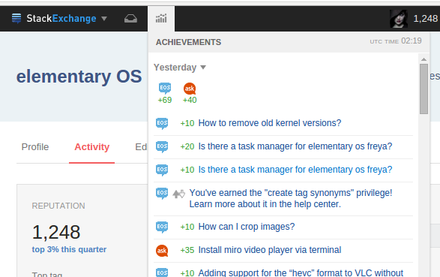 (Also if clearly observe, after that message, I have earned 40 reputation.)

I am using "bug" tag, feel free to edit it is not a bug

I believe you were over 1250 when an asker accepted one of your answers. After getting notified of your new privilege level, your answer was unaccepted, which put you below 1250. (I'd identify the answer, but it was accepted for a grand total of 9 seconds.) But the privilege notification had already gone out. We don't notify users of loss of privilege (or losses in general). So I think we should blame caching after a fashion.

The only thing that gives me pause is the order of messages. It does seem as if the privilege notification should always come after the notifications of the reputation changes that caused the privilege change. But I think it can be explained by a different sort of caching. We don't notify you of upvotes until they have been locked in.

Not the answer you're looking for? Browse other questions tagged discussion bug status-bydesign .

This site is for discussion about elementary OS Stack Exchange. You must have an account there to participate.

4
Is it fine `quiting answering questions`?
1
How to edit info for tag wiki?
2
Best way to deal with minor edits
1
Possible bug in anonymous editing